In issue 216 of Total Film magazine, Aaron Taylor-Johnson talks about going up against one of cinema’s biggest, baddest beasties – Godzilla himself.

“It was a physically demanding role. I’m in helicopters, we’re on trucks and trains and we’re moving giant missiles… things are crashing around us. You’re getting close to death. There’s a lot of stuff that’s made it really active.”

Not that this makes this new ‘Godzilla’ purely an action movie, as Taylor-Johnson stresses: “There are scenes in this where I’ve been more emotionally challenged than in any other drama.”

Variety also lets us know that A Better Life actor Demian Bichir is currently in talks for Oliver Stone‘s Savages. He’s playing Alex, who they describe as being “a two-timing attorney who works for Salma Hayek‘s cartel.” He’s been receiving some positive notices for his work in A Better Life as of late, while he’s also appeared in the Showtime series Weeds, and played Fidel Castro in Steven Soderbergh‘s Che.

Based on the book of the same name by Don Winslow, it follows two drug dealers in Laguna Beach – played by Aaron Johnson and Taylor Kitsch – who must save their friend, O (Blake Lively) who has been kidnapped by the Mexican drug cartel. Benicio del Toro is playing the main enforcer of the cartel, and Hayek is playing Elena, the woman who looks after O while she’s in their custody. Emile Hirsch has an unspecified part, while Uma Thurman and John Travolta will have a Pulp Fiction reunion here, with the former playing O’s mother, while the latter is appearing as a “burned out DEA agent.” 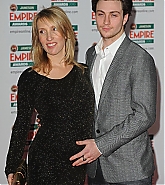 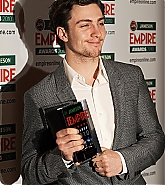 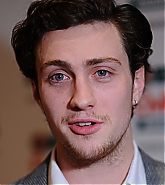 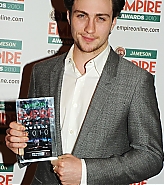 A new press junket interview Aaron did for Kick-Ass has surfaced. Watch it below and caps will be added shortly. Enjoy!

Aaron talks about how things were on the set of Kick-Ass in a new interview.

Aaron Johnson has revealed he had to endure hours of filming in a sweaty jock strap for Kick Ass.

The 19-year-old Nowhere Boy star – who is engaged to Sam Taylor Wood – plays a normal high school kid who decides to re-style himself as an amateur superhero, complete with green wetsuit, in Matthew Vaughn’s action comedy.

Aaron revealed: “It gets pretty sweaty at times if you’re fighting constantly and I had to wear a jockstrap, so it was uncomfortable, but you get used to it.”

He added: “I was in the costume probably every day for about 12 and a half hours a day, for three months. Only two toilet breaks a day. It was enjoyable, but it was mad.”

Visit our photo gallery currently at 13,629 photos and growing!