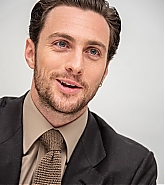 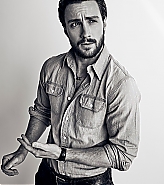 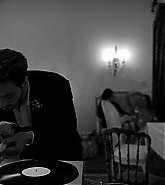 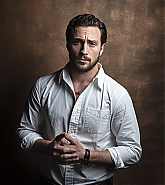 Aaron was born in High Wycombe, Buckinghamshire, the son of Sarah and Robert Johnson, a housewife mother and civil engineer father, respectively. He has a sister, Gemma, who appeared in his film Tom & Thomas (2002) in a small role. Johnson is Jewish. He was educated at Holmer Green Senior School and attended the Jackie Palmer Stage School in High Wycombe between 1996 and 2008, where he studied drama, tap, jazz, acrobatics, and singing. 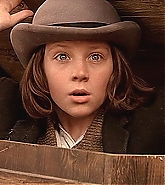 Johnson began acting at the age of six. On stage, he appeared in a London production of Shakespeare’s Macbeth, playing the son of Macduff alongside Rufus Sewell, who played Macbeth, in 1999. He appeared in Arthur Millerâs All My Sons in 2000. His television roles have included Niker in the 2004 BBC adaptation of the novel Feather Boy, Aaron in Danny Brocklehurst’s ITV1 serial Talk to Me, and Owen Stephens in Nearly Famous. In 2003, Johnson appeared as a young Charlie Chaplin in Shanghai Knights, with Chaplin depicted as a member of a London gang of street thugs. In 2006, he appeared in The Illusionist, appearing in the early flashback scenes as Edward Norton’s character, Eduard Abramovicz, as a teenager. The scenes show the young Eduard as he first learns magic, and to do this, Johnson had to learn how to perform the ball trick displayed by his character. He learned how to perform the balancing of the egg on the stick, although that was effected mechanically. Also in 2006, he starred in the film The Thief Lord, as Prosper.

Johnson appeared as John Lennon in the 2009 biopic film Nowhere Boy, directed by Sam Taylor-Wood. His performance saw him receive the Empire Award for Best Newcomer and he was also nominated for Young British Performer of the Year by the London Film Critics’ Circle. In 2010, Johnson appeared as David “Dave” Lizewski/Kick-Ass, the lead character in Kick-Ass, based on the superhero comic book of the same name by Scottish writer Mark Millar. His performance in Kick-Ass saw him nominated for the BAFTA Rising Star Award. He has also appeared as the central character, William, in Hideo Nakata’s Chatroom. In December 2010, Johnson joined the cast of Albert Nobbs as a replacement for Orlando Bloom, who dropped out of the production due to his wife’s pregnancy. Johnson starred in R.E.M.’s 2011 music video “Ãberlin“, which was also directed by his then-fiancÃ©e.

In 2012, Johnson played Count Vronsky in Anna Karenina. Later that year, he starred as Ben in Oliver Stone’s Savages. HitFix film critic Drew McWeeny was positive of the bond between Johnson and co-star Taylor Kitsch, which “seems not only credible but lived in and authentic throughout the film”, and noted the evolution in maturity of Johnson since Kick-Ass. Johnson starred in the Godzilla reboot, released in May 2014. Johnson played Quicksilver in Avengers: Age of Ultron (2015), the sequel to The Avengers.Johnson first appeared as the character in a post-credits scene of the film Captain America: The Winter Soldier. The role reunited him with Elizabeth Olsen, who played his wife in Godzilla.

In 2016, he played Ray, a menacing Texan, in Tom Ford’s thriller Nocturnal Animals. For the role, he won the Golden Globe Award for Best Supporting Actor â Motion Picture. Johnson also became first Golden Globe Award for Best Supporting Actor winner since Richard Benjamin who did not receive an Academy Award nomination. For the role he also received a nomination for the BAFTA Award for Best Actor in a Supporting Role. In 2017, he played an American soldier (alongside John Cena) in Doug Liman’s thriller The Wall, and in 2018 he will appear in Outlaw King, an American-British historical action drama about Robert the Bruce and the Wars of Scottish Independence. 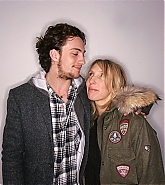 Aaron Johnson began a relationship with Nowhere Boy director Sam Taylor-Wood, after meeting on the 2009 set of the film. They announced their engagement in October 2009 and married at Babington House, Somerset, England on 21 June 2012. The two changed their surnames to “Taylor-Johnson” and use the surname professionally. The couple have two daughters, Wylda Rae (b. 2010) and Romy Hero (b. 2012). He is also stepfather to Angelica and Jessie- his wife’s daughters from her previous marriage to Jay Jopling.